Two out of five stars
I was astounded when I opened this package and began looking through the cards. The first were standard division operations with the correct values on the other side in the standard structure of flash cards. Then I encountered one where 2 was being divided by zero, I flipped it over and went into a moment of brain lock. The value was listed as ZERO! This is such a colossal mistake, for it is drilled into students very early that division by zero is not allowed. Or in mathspeak, is undefined.
While it is only one mistake, it is a major one. So even though 171 of the sides of the cards may be right, the failure on the one I cite seriously demeans the entire package. 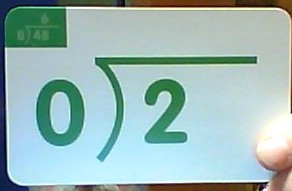 Posted by Charlie Ashbacher at 5:58 PM No comments:

Review of "WWII: The War In Europe, Volume 1," a VHS tape by the History Channel

Review of
WWII: The War In Europe, Volume 1, a VHS tape by the History Channel

Three out of five stars
This brief video is an overview of the entire war, from the first shots fired in Poland to the Japanese surrender aboard the battleship USS Missouri. As such there is no analysis of the causes of the war, no discussion of general strategy, just a narration of a series of short sections of battle footage. In general, maps are not used to locate where the battle is taking place, only the geographically literate will be able to understand the location and put it in context.
Some of the video also seems misplaced. In the section about the Battle of the Bulge, some of the footage has the unbundled men fighting on bare ground. This battle was fought in the dead of winter with freezing temperatures and a lot of snow on the ground. This tape is at best a primer on the war, at worst it is a collection of snippets of combat footage where the location is altered with no prior re-orientation.
Posted by Charlie Ashbacher at 5:05 PM No comments:

Three out of five stars
While the basic storyline of this movie is a strong one, the powerful urge that dislocated Native American tribes feel to return to their homeland, there is a section in the middle that should be extricated. For it is an attempt to interject some humor into the story, but it just falls flat.
Unlike many other western movies that depict the Native Americans as savages, John Ford takes a very compassionate look at how the Native Americans were treated by the invading Europeans. A band of Cheyenne have been taken from their ancestral lands where they can grow and hunt their own food to a desolate place where they are dependent on government handouts.
When a delegation of government officials fails to arrive to address the issues, the leadership of the Cheyenne decide to leave the reservation and travel to the area known as Yellowstone, which is approximately 1,500 miles away at a time where there were no roads over the rough terrain.
Richard Widmark stars as an Army officer that dislikes the order to round up the Cheyenne and return them to the reservation. He clashes with another officer and does what he can to argue the case for the Cheyenne to simply be allowed to go back. This is a very good story and a bit of a history lesson.
What reduces the movie’s quality is a segment in the middle where Jimmy Stewart plays Wyatt Earp, a man most reluctant to enforce the law when it disturbs his card game. When a cowboy challenges Earp to a gun duel, Wyatt shoots him in the foot and then removes the bullet. The anesthetic is literally a bop on the head with a piece of wood. When a ragtag army of townspeople leave Dodge City to go deal with the Cheyenne the absurdity only expands. When a lone Cheyenne fires some shots, a carriage full of well-dressed ladies is overturned and we all see their bloomers and petticoats when they go legs up in the air. It is an attempt at humor that just seems pointless.
Posted by Charlie Ashbacher at 2:48 PM No comments: